Made famous by Robin Raven of USA Today in her article: 30 of the most adorable dogs you can meet at wineries.

“Rancho Rossa Vineyards is the perfect place for a winery dog. Their brand label, Rescued Hearts Cellars, is unique in that 100 percent of the profit is always donated to their non-profit of the same name. It was inspired by a special winery dog named George Bailey who was adopted from the Humane Society. The non-profit has an emergency medical fund for rescues in Arizona. 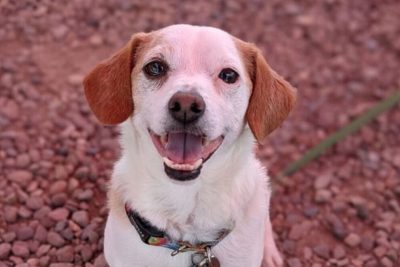 Little Arthur Jackson is the current winery dog at Rancho Rossa Vineyards. He is a rescued dog who is an adorable combination of Jack Russell, Chihuahua and Dachshund. Arthur likes everyone, and that like turns to love when someone has food. He serves as the Chief Executive Snack Inspector – and he has the business card to prove it! He loves to join wine tasters on the couch when good snacks are involved.

Arthur has his own non-profit wine called Tiny Dancer. When he runs, he does a precious prance, so they thought the name was perfect. The profit from his wine goes into the organization’s emergency medical fund for Arizona’s animal rescues.’